My second game with Brian was much closer than the first. I again revisited I've played before, but haven't posted here. The 29th Infantry Division, trying to hold back the Martian advance, needs to protect its logistics in the form of two supply depots which have been brought from Vicksburg via rail.  The Martians win by destroying both of them (def 3, armor 6), and the humans win by breaking the Martians before they succeed.  This is a long table game with the humans defending in depth, being able to deploy (including as hidden blips) on their entire half of the table.  Due to the advantages to the defender, especially with all that terrain to slow the advance, the Martians receive about 20% more points. 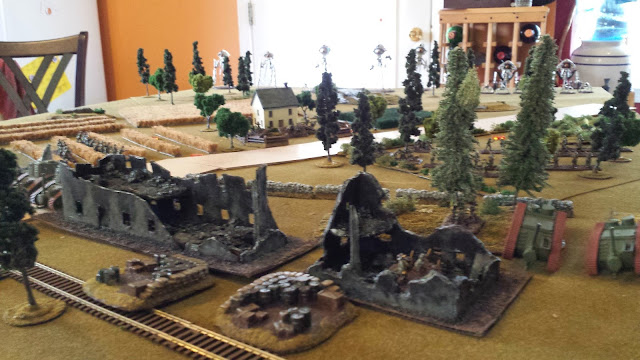 The depots were hidden behind some buildings on the right, protected by infantry in the thick forest ahead of them and a unit of MKIIs poised behind them.  The center and left was far more open then the approaches on the right, so I deployed heavily on that side with my tanks and additional infanry. 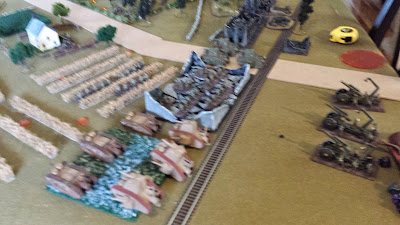 Further, there were two rough riders and a HMG deployed as blips in the fields, which would prove to be a great way to deploy those motorcycle troops. 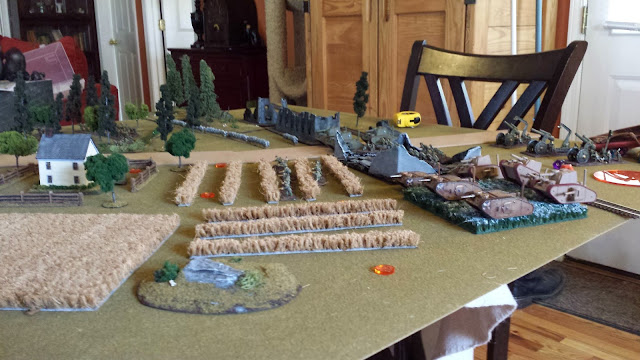 We'd rearranged the terrain a good bit, and the back of the table was much more clear, at least at the center and right, making for a much faster Martian advance. 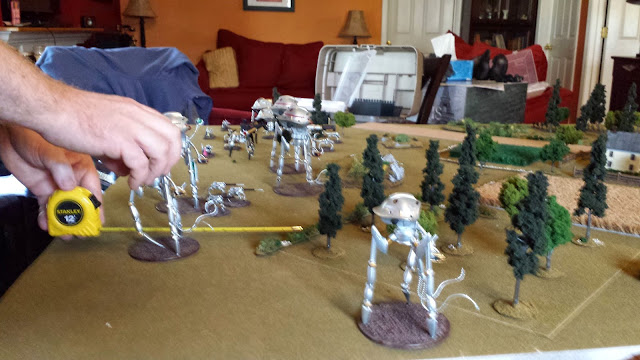 They quickly came into range of the mortar team I'd deployed in the central farmhouse, and routed it. 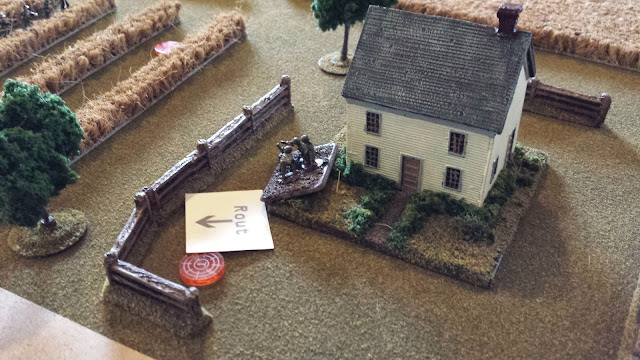 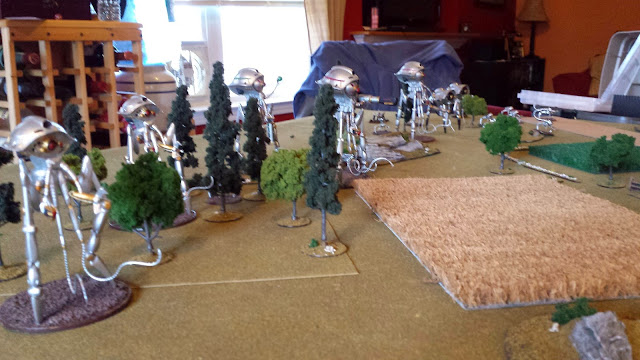 Yet, my dice luck continued to hold out. I one-shotted a scout tripod advancing on the left as it emerged from the forest. 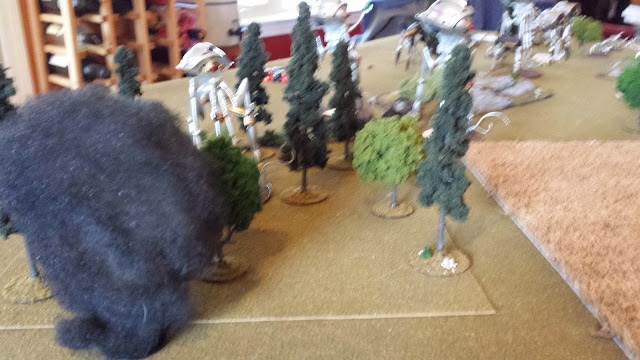 However Brian surprised me a bit with an aggressive use of the Martian infantry. A lot of times, the slavers and their drones barely make a difference in big battles (especially on a long table), and in fact can often prove to be a liability in break-point battles, as the drones are far easier to kill than the big tripods. Yet in this battle, Brian used them very well and they ended up being incredibly valuable, even if some of them were lost on the long approach through the open field at left. 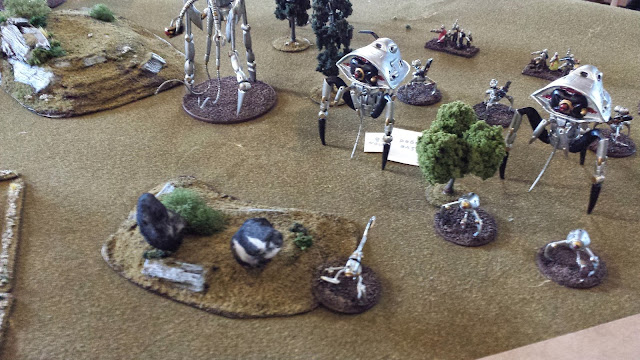 The drones advanced into the swamp at the edge of the forest, dangerously close to the depots now. I hadn't expected he'd contest the right so strongly, as the forest is typically not suitable for Martian tripods and the trees complicated line of sight.  Yet the Martian drones were as much at home in all that cover as the American doughboys, and marched straight in.  The drones and slaver, supported by an assault tripod, destroyed the MKIIs despite the tree cover, and moved to cleanse the woods of the human infantry and mortar teams hiding inside. 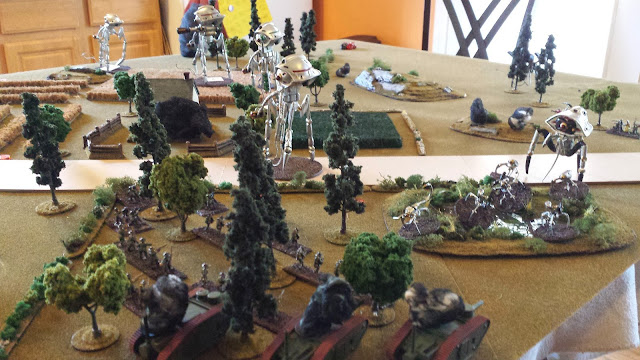 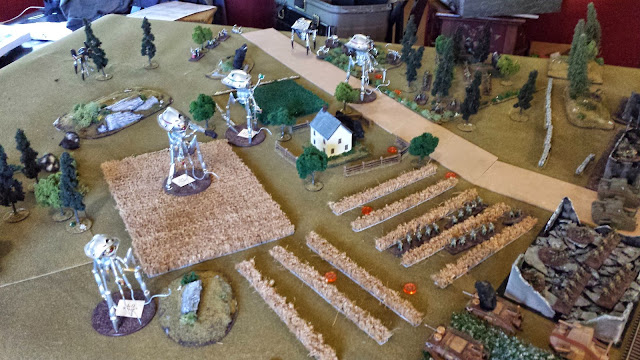 The advance on the left went much less well. Two more tripods were destroyed and one immobilized by the emerging rough riders and heavily damaged by tank fire. Brian's plan to advance scouts on the left to gain line of sight for his grenadier (targeter function) had failed. 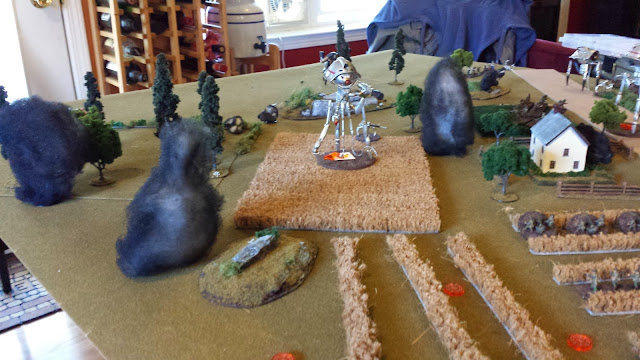 As the Martian left collapsed with only one immobilized tripod remaining, the American forces began to pivot to support the firefight happening in the forest at right. 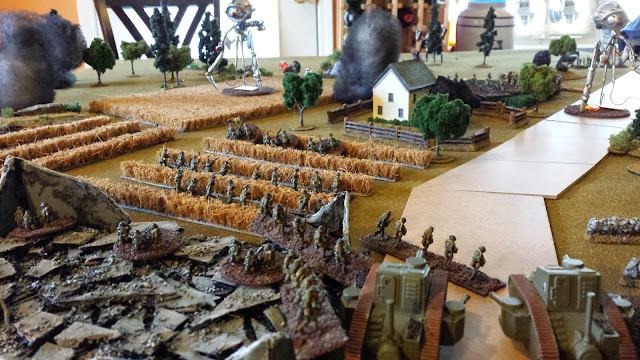 The immobilized tripod did manage to do some damage before it was destroyed by tank fire, unfortunately tying up some crucial resources. 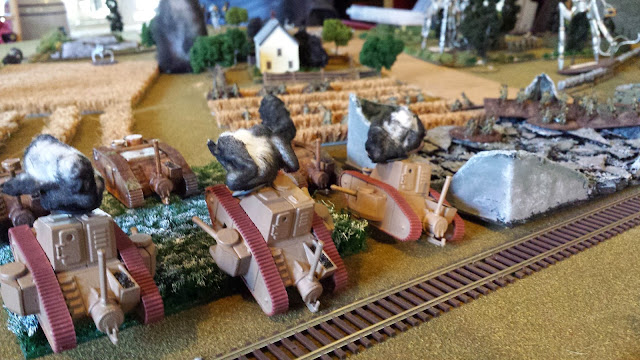 On the final turn, the Martians drones advanced into the forest and slaughtered the humans hiding there (even the lobototons got some kills!). Both Brian and I were surprised to find that the Slaver and the assault tripod in the forest had line of sight on the depots, if obstructed. 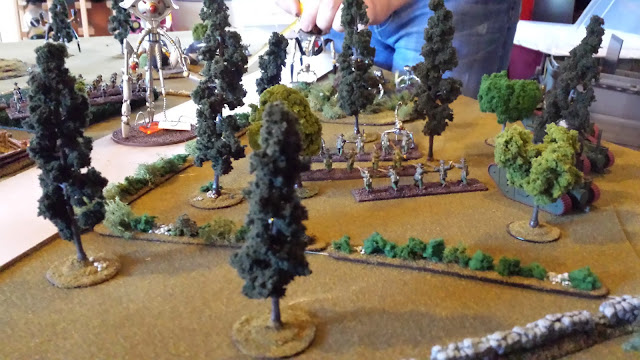 The Martians were teetering at the edge of their breakpoint, with only one more unit needing to be destroyed.  However Brian's dice finally worked for him, and he was able to destroy both of the depots with the only two shots he had in range, despite cover bonuses, very narrowly winning the game. A very intense and closely fought battle!