I'm painting the low ruined lots first, to experiment a bit and get a little practice before I mess with the big pieces.

Painting this took the better part of an hour, but I think it's worth the effort. I'm using cheap craft paints for all of this, either Folk Art or Americana brands which retail for about $1.50 at the local crafts store. No way I'm using my good Vallejo paints for something like this. Also, despite the number of coats, acrylic dries so fast that I had zero wait time. By the time I finished a coat, I could go back to the first few areas with the new color and the first coat would be dry. I used 4 different greys and white at the end.  I'm finding that 3-5 layers of color really adds to the realism. The eye just accepts it more readily than one or two layers. I think beyond 5 it would be muddied and excessive though. 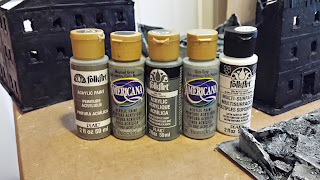 First, a solid coat of a darkish grey, concentrating only on the large flat surfaces of the rubble. I'm leaving the clusters of small rubble (cat litter) mostly alone with this layer.  The outside walls are also half painted, starting at the bottom and brushing upwards as the brush dries.  All of this leaves lots of black primer showing through. 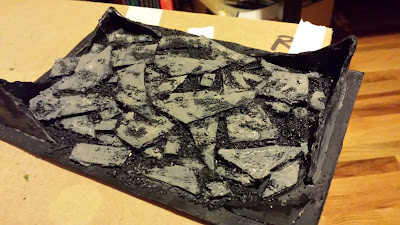 Then, a lighter grey, with a much drier brush.  I'm using my go-to dry brush, which is an old hard circular brush with uneven and rigid bristles. I brush over the darker grey (it was actually more of a stippling motion rather than brushing), which blends it into the black on the outside walls, and gives some texture to the larger rubble. This coat got a wider layer, but still lots and lots of black showing through. 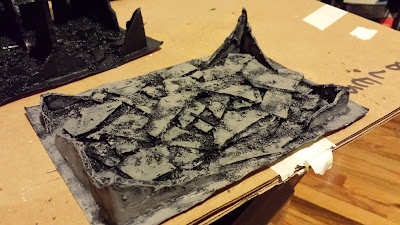 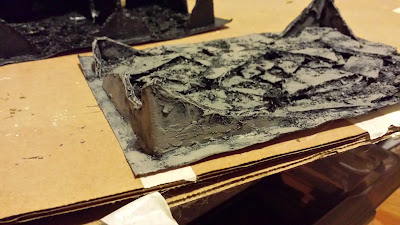 Then, my secret weapon. Folkart makes a color called "Ash" and it is true to its name. It doesn't look quite right when it's wet, but when it dries it somehow creates a powdery impression (without actually being powdery) and it looks remarkably like ash.  I use this to fill in some of the depressions with a heavy drybrush, and also work over the areas of cat litter that I left alone earlier. Not brushing over these areas with the earlier colors allows for more black to show through the ash, creating sharper shadows without using a wash (it would take a LOT of wash). Every part of this piece gets a bit of ash drybrushing, some parts a light coat, some parts heavy. 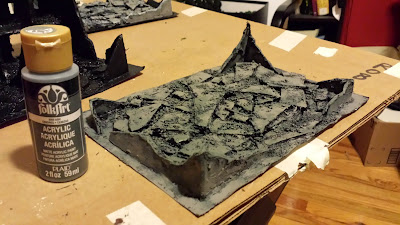 Then, a much lighter drybrushing of the raised areas only with "slate grey" a very light grey. Tops of the walls, the corners, some edges of rubble, and the raised parts of the cat little rubble. 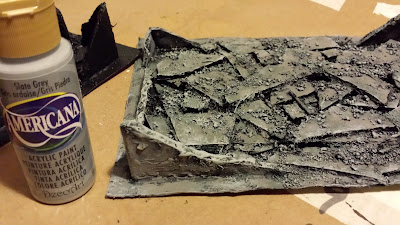 The last main coat is a drybrushed satin white, even lighter than the slate grey, and just to pick out some details, like the tops of the cat little (light enough so that the slate grey shows too), the tops of the walls, and some of the edges. Using white creates a very dynamic looking piece. 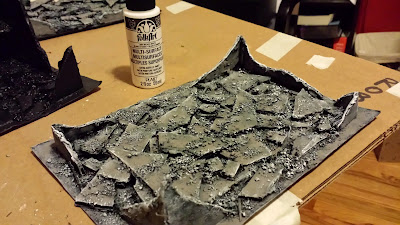 As you can see, quite a bit of the black primer is still showing through. No need to add shadows! 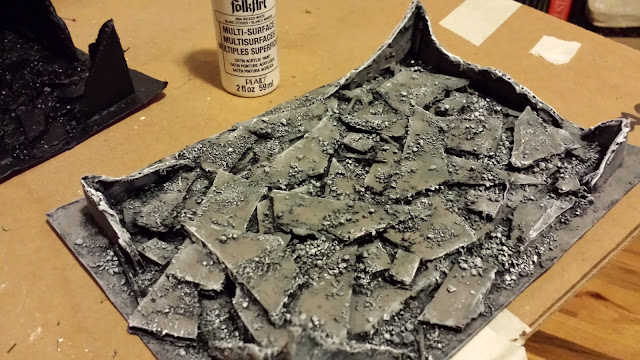 Just a bit of brown for the wood, and we're finished. And considering I already had everything I needed from other projects, the only thing it cost me was time. I'd say each lot only took about two hours from cutting the cardboard to finish.  Next we're on to the bigger projects, starting with the collapsed tenement in the background. 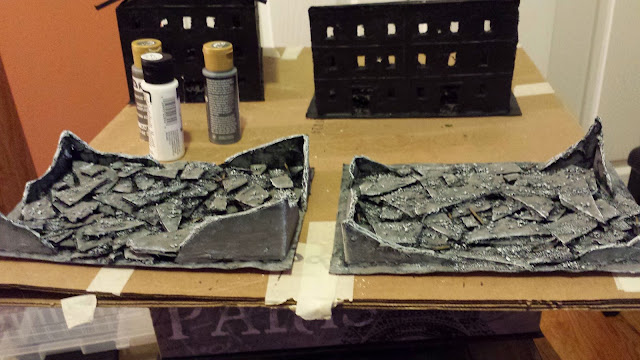 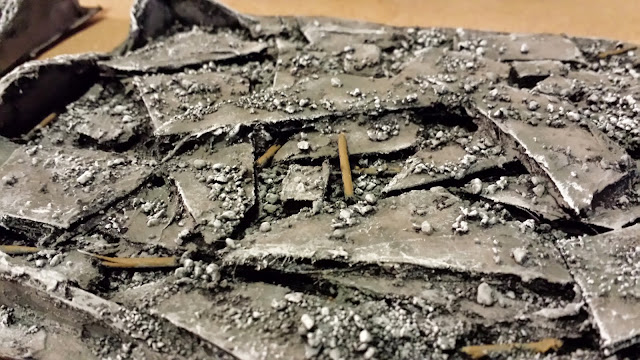