In gaming terms, what's worse than an unfinished game? Especially one that was just starting to get interesting.  It leaves me with an itch deep in my bones, too deep to scratch without a long sharp knife, or else a really good game of something. 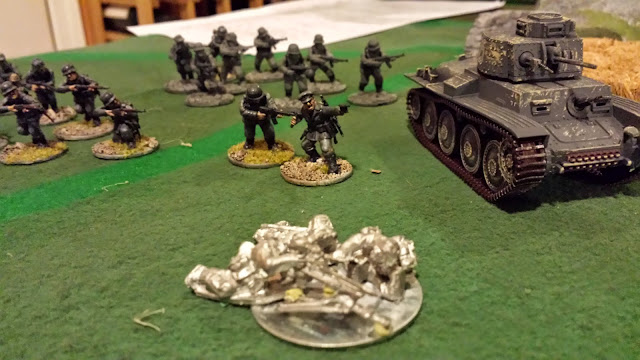 I met a new gaming buddy today, Nate, who after some introductory games of All Quiet, introduced me to Bolt Action, a 28mm WWII skirmish game.  I was excited to get into this because I've been seriously considering gathering pieces for a Spanish Civil War skirmish game, and this is a good way to start trying out similar rules and periods. I played some late war Germans vs. Nate's Americans, but he'd barely taught me the ropes when my wife arrived home way early from work, making an early end of it.

But the game got me interested just enough to want to see how it would turn out, but alas, we'll never know if my Wehrmacht would have triumphed or faced defeat. 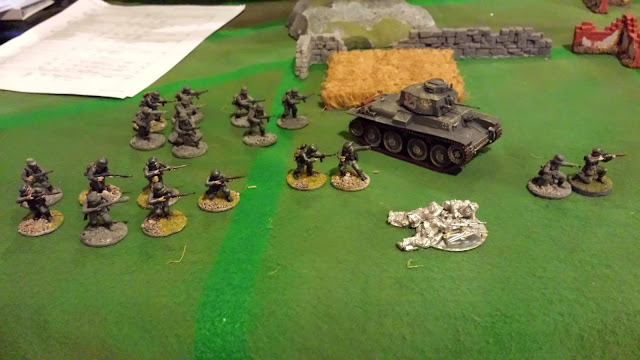 My forces consisted of a light tank, a machine gun team (that's the silver, unpainted blob above), a command unit, a sniper, and two assault teams, one including anti-tank weapons. 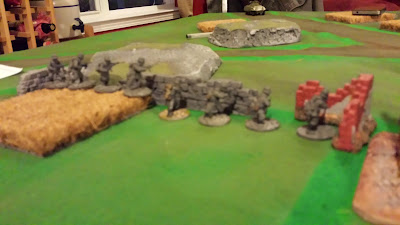 I spread out my teams the flanks, with my commander, machine gun, and snipers holed up in a two story ruin at the center, near the objective I had to guard. 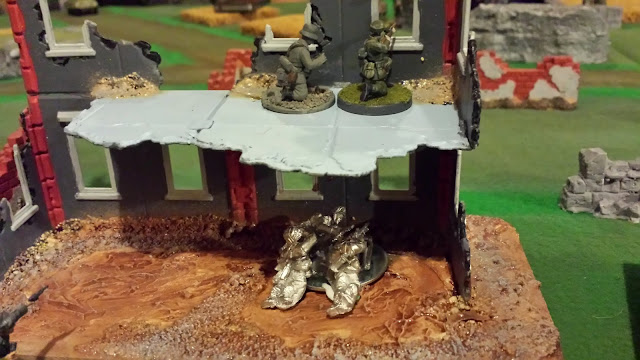 A rifle section was positioned on the left and the right of the building. 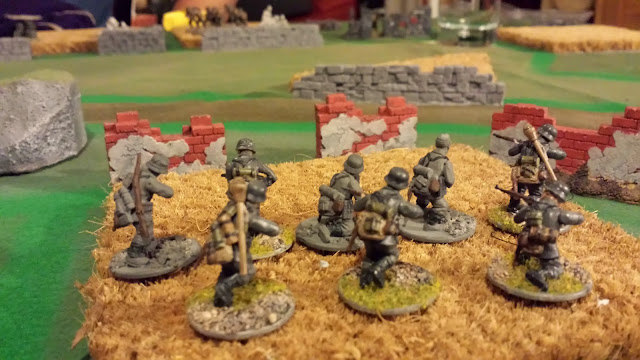 The Americans, which had a bunch more units, were deployed across the fields. They had a jeep and an armored car in addition to an extra MG. 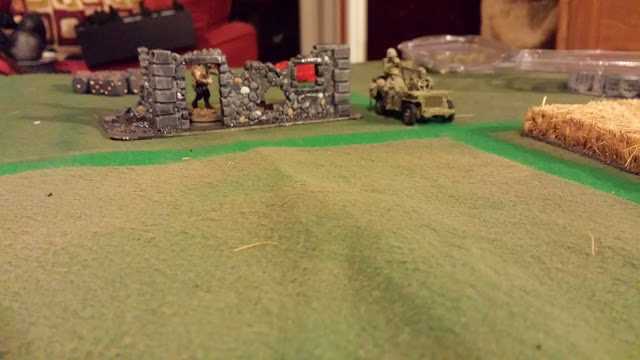 One of Nate's assault teams in the ruins, and on the right, the oil drum objectives that I needed to capture. 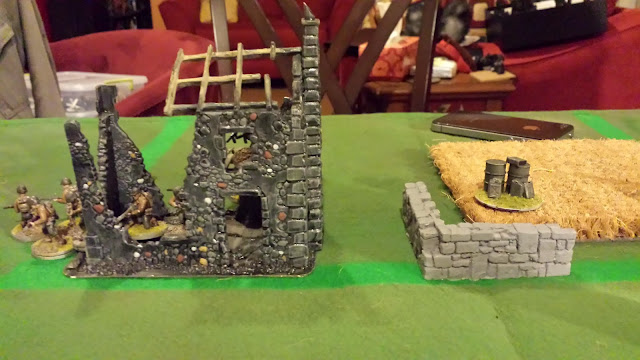 Accurate rifle fire destroyed the jeep before it can do much. 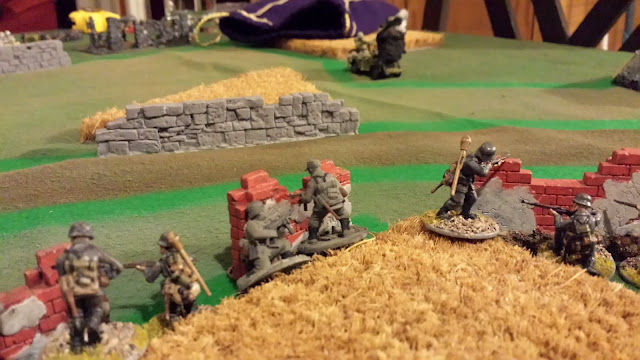 Nate moves his armored car up the road, taking shots at one of my assault teams. 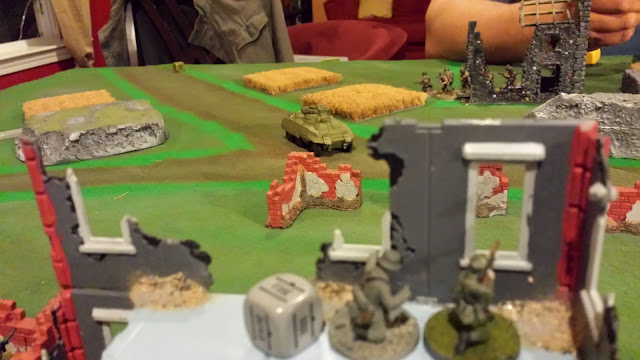 The next turn he continues up the road, facing down my tank with his armored car's AT weapon. It scores a hit, and stuns the crew, pinning them down and preventing them from taking any action this turn. 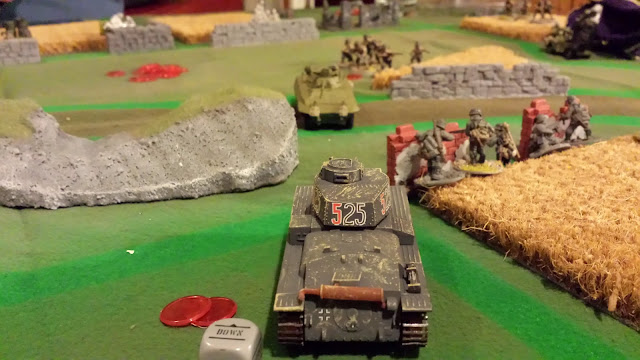 However, that brought him in range of my Panzerfaust AT weapons among my infantry.  They fired true, destroying the car. 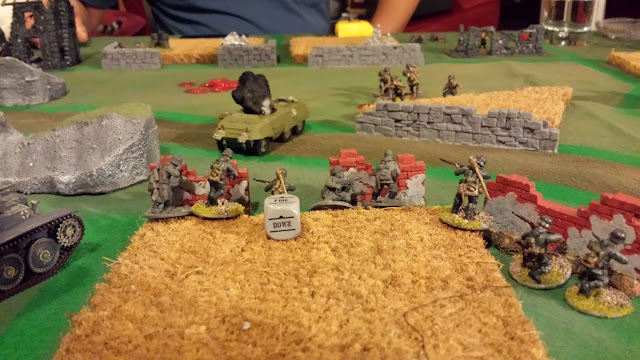 Then, they pressed the attack, cutting through half of the infantry platoon hiding in those wheat fields. 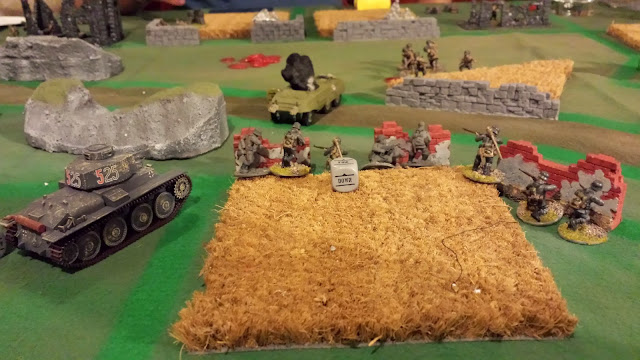 Fire through the ruins had also managed to whittle down his other infantry hiding in the ruins, making me bold enough to start moving my own infantry up towards the enemy objective. 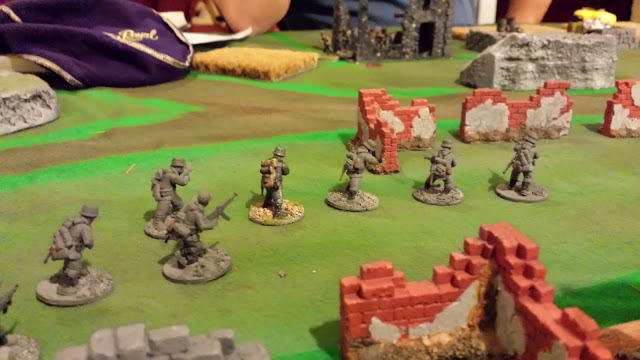 And then...?  Nothing. That's it.  I blew up a jeep, an armored car, and killed something like 8 infantry soldiers, and Nate managed to shake up (but not wound) my tank. I was winning. But now there is just emptiness where victory should go.  A yawning abyss where exaltation should overflow me.  A lingering dissatisfaction that can only be cured by...

As for Bolt Action - it was fun, kind of cinematic, but very "game-like" in feel. I'd definitely play again, if others provide the pieces, but I don't think it's the way I'm going for SCW.  I've been reading up on the Too Fat Lardies' Chain of Command Rules and they seem much more interesting, with more realistic ranges for weapons, etc. I'm hoping to try a game in the next few weeks before I commit.
Posted by Unknown at 12:49 PM